Our trip was coming to an end. We had 6 more nights until we had to be back at the Bangkok airport to catch our flight back to Delhi. What better way to end our trip of a lifetime than chilling on the beach for a few days?

Originally, the plan had been to head to Sihanoukville, a beach town in the south of Cambodia. To do that we would have had to take either a night bus directly to the coast (which has a bad reputation for accidents), or take a bus back to Phnom Penh, then get on another one to Sihanoukville, which takes over 12 hours. Having little time left and wanting to make the most of it, we decided to sacrifice Sihanoukville and make the trip back to Thailand to the island of Koh Chang.

The total trip from Siam Reap to Koh Chang takes around 10 hours. We decided to go with a combo of big bus to the border, mini bus to the pier and ferry to the island, for about $15 a person. The bus dropped us off at the border and we had to walk across the border to find our mini bus. The Cambodia-Thailand border is notorious for scams, but we didn’t run into any issues.

The mini bus dropped us off at the ferry, and we caught the sunset during the ride over to the island.

When we got off on Koh Chang it was dark, and we didn’t have any place to stay. We caught a songthaew (a pickup truck taxi) to Lonely Beach, the backpacker area of Koh Chang.

The second hostel that we went to had space for us, so settled in there. It had an awesome laid-back vibe and cool staff, and we decided to stay there the entire time we were on the island. The price was right for a basic private room with a bug net (this is the only place that we had stayed that offered bug nets, and they were greatly needed because the mosquitos on the islands are relentless), and a bathroom that we shared with the rest of the guests. They had a restaurant and bar as well with cheap breakfast and coffee that we hit up every morning. Perhaps the only downside with it would be that it is right in the middle of the party area and is the locals bars keep the music pumping until the wee hours of the morning. It didn’t bother us, at that point we were used to the noises of SE Asia, but if you weren’t you may want ear plugs. Overall, awesome place! 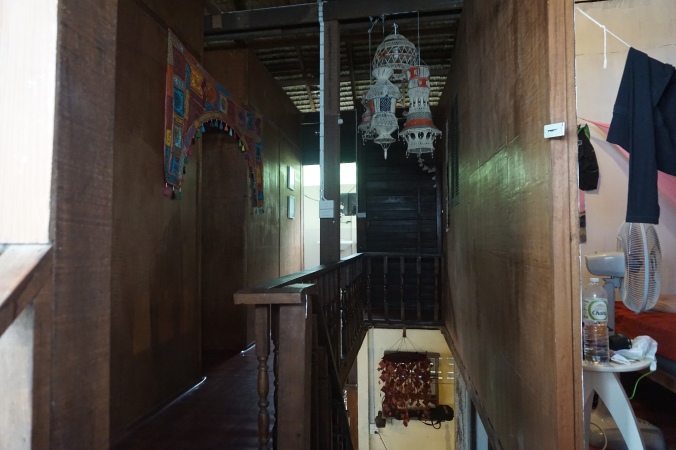 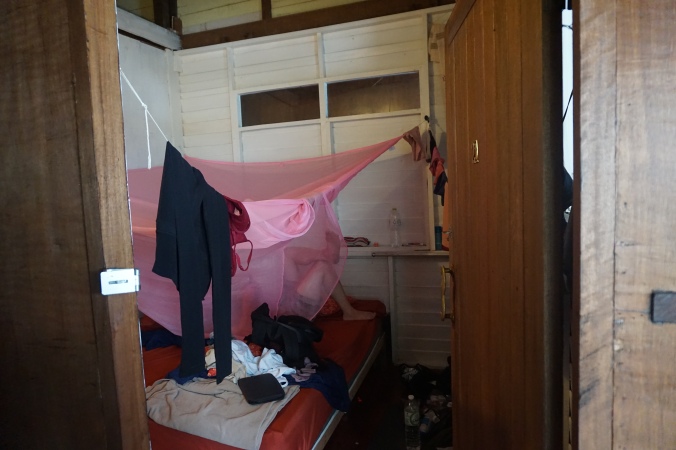 The main thing on our agenda was to get back on the hogs. The next morning, leaving Nicole alone to catch up on her blog (check it out here), we found a place to rent them for 150 baht a day and drove the island from one end to the other. 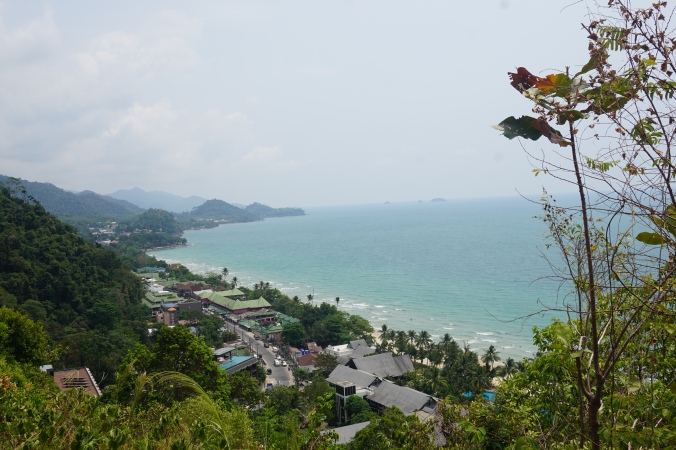 Koh Chang is huge. It is Thailand’s third largest island, behind Phuket and Koh Samui. It is covered in jungle and mountainous terrain, and the road the around it does not fully connect because of the dense jungle at the southern tip. There is only about 500 metres of terrain that isn’t connected by a road, so there is no way to get around the entire island. It took us a total of about 6 hours to drive to where the road ends and back to Lonely Beach. The roads on the island are pretty well taken care of, good for riding the hogs. This was the first place that we rented bikes that we were given helmets to wear. In Thailand it is the law to wear a helmet, but it isn’t usually enforced, and most rental places don’t even have them. 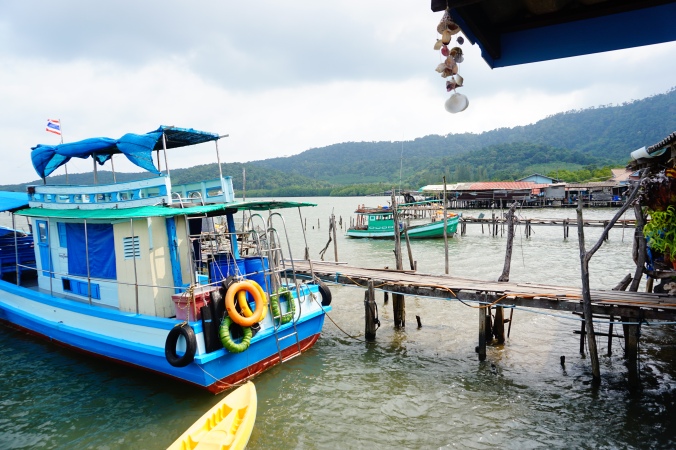 That night, eager to check out the nightlife we hit up the 7 Days (a rip off of the 7-11 minus the Toasties, WTF?) to grab some Changs and assess our options for party. But instead of hitting a bar, we stayed out front the 7 Day. Perhaps you’ve read our post about Koh Phangan where we learned that outside the 7-11 is a perfect place to drink, people watch, and listen to rad ballads from the 80s? The 7 Day offered the same amenities minus the music, which was a problem. A problem solved by our bluetooth speaker and Youtube. Before long, others had caught on to what we had going on and followed our lead. Everyone took turns connecting to the speaker, and we heard everything you can imagine, from German rap to old school Biggie Smalls. If you are ever in Thailand, ditch the bar and head for the 7-11 (or the 7 Day). No cover and cheap beer! 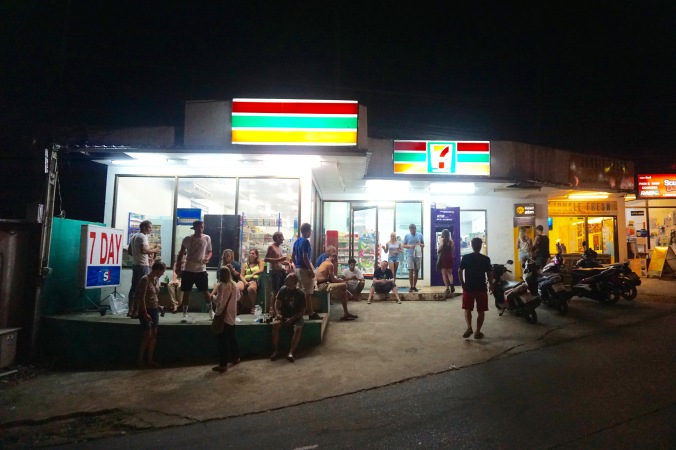 The next day we set out on the hogs again to find a new beach to hang out at, this time with Nicole joining on her very own hog. It was her first time riding and she did awesome! We found a little village on the south of the island with a beautiful stretch of beach and some funky bars. We hung out there for most of the day, playing in the ocean and lounging in the sun. 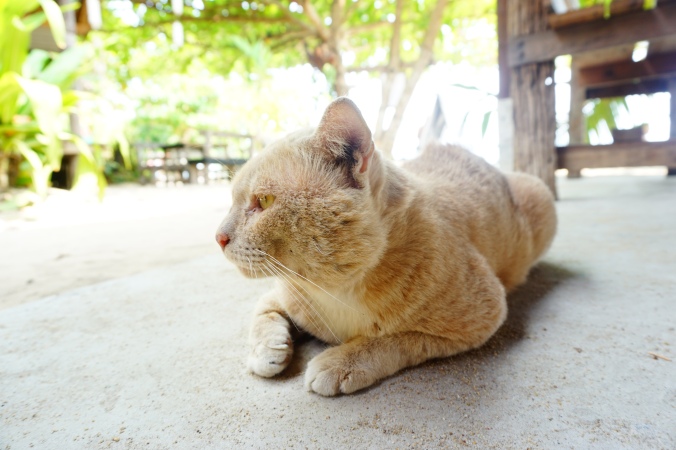 On our way back to Lonely Beach we stopped at Ban Bang Bao for a bite to eat. Ban Bang Bao is former fishing village that is built on interconnected piers, and it is a popular lift off spot for diving tours. The village consists of family run restaurants and souvenir shops, and is know for its high quality seafood.

The next day marked the last day. The last swim in the ocean, the last ride on the hogs. The last of wandering and exploring. The last beers on the beach. The last vacation from our vacation.

The next morning we boarded a bus back to Bangkok. We had one last night left with Nicole and we were determined to make the best of it!